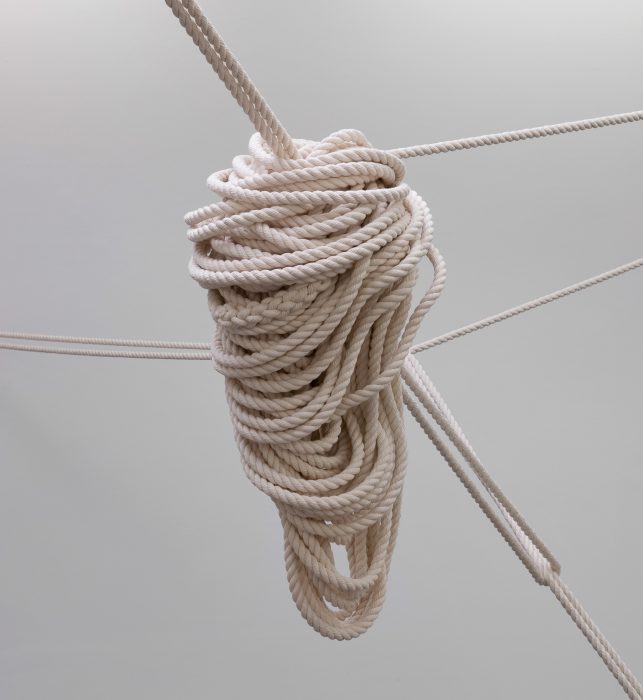 The shapes of the three rope figures YES, OR and NO are based on a survey registering the visual associations of students in relation to the three terms “yes”, “or” and “no”, as pronounced in various languages. The rope figures are assigned the distinct meanings of these three words based on formal resemblance with the results of the study. As such, the abstract shapes represent verbal expressions bearing distinct semantic content.

Each rope figure is made from one continuous loop of rope folded into itself to create a pattern, and are constructed after the same principles as the string-figures one can create with a single loop of thread between ones fingers, either alone or in a collaborative game where one constantly alters the shapes. The sound association survey is presented by its original image material in the form of two watercolours. One depicts a variety of abstract shapes based on different formal characteristics. The other is the result from the survey, collapsing the abstract shapes into three new shapes. The study refers to previous research on associations between verbal sound and visual form, like the so-called bouba-kiki effect, which has demonstrated a collective tendency to connect the same types of sounds to the same types of forms. The phenomenon indicates a non-arbitrary relation between words and their meaning: The bouba/kiki experiment suggest a universality across languages in how we synesthetically connect shapes to sounds.

String figures have been part of oral storytelling traditions in many cultures through centuries, as games that can be played individually or collaboratively; as illustrations for stories and myths; and as a tool to memorise the spoken word. One speculative theory discussed amongst a small group of linguists is the idea that the invention of knots co-evolved with deep structures in human language, requiring a combination of cognitive and practical skills, and that string figures may have a part in that story. Speculative as this may be – common to both strings and language is that their origin is apocryphal, there is no way to trace their origins in culture: Strings have rotted away and oral language prior to the invention of sound recording can’t be re-heard.