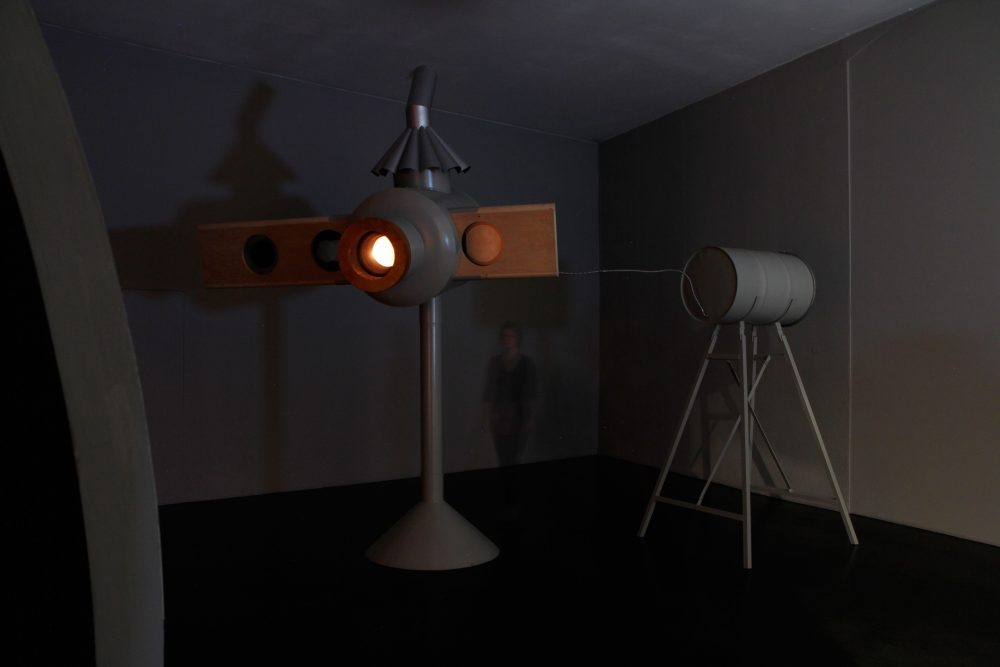 The custom-built projector in Extraordinary Popular Delusions projects a flickering image of the sun—the earth’s ultimate source of energy. An oil barrel is connected to the over-sized projector, and supplies the light source in the projector, an oil lamp.

The projector is in the style of one of the oldest historical magic lanterns, pre-photographic projection apparatuses used for such divergent purposes as entertainment, education, scientific experiments, propaganda and spiritual séances. The novel experience of looking at projected images was a spectacle that at the time could create the illusion of an apparition.

The use of oil as a light source in the early magic lanterns influenced perception and observation physically as they produced soot and flickering light. In Extraordinary Popular Delusions, the light source – oil, basically old sunlight – becomes a part of the projected image, physically and symbolically as the projector and image become a self-referential, impossible energy system.

Magic lanterns were an essential part of popular culture from the 17th till the 20th century. They were often of simple design, and was considered commodities rather than valuable objects in themselves until they became collectables integrated in museum collections after their use declined in the 20th century. The types of light sources used within magic lanterns were of different natures through the years as technologies changed. Initially lit by candles, oil became increasingly popular as a light source and remained in use even after the advent of gas and electric light. The use of oil as a light source in the early projection apparatuses, as well for observation instruments such as microscopes, influenced perception and observation physically as they produced soot and flickering light.

Extraordinary Popular Delusions creates a link between oil and perception by the burning oil that becomes the flickering projection one can observe in the installation. The thematically related video and diagrams Non-conservation of  Energy (and of Spirits), presented together with the magic lantern in the installation, adds another perspective on how ideas about energy cycles and perception of the world potentially inform each other.

Thanks to Dipl. Phys. Wolfgang Engels, Carls von Ossietzky University, responsible for the construction of the magic lantern.

Commissioned by dOCUMENTA(13) with production support from Arts Council Norway, the City of Bergen and NBK/Vederlagsfondet.