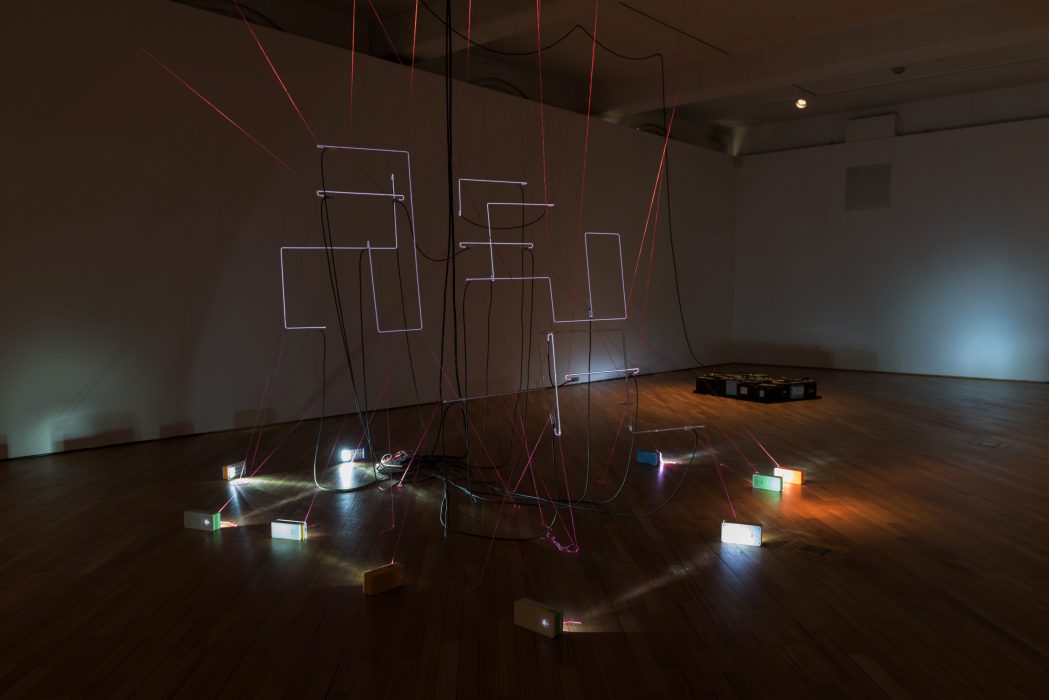 Aurora, the goddess of the dawn in Roman mythology, has also lent her name to the northern lights, Aurora Borealis, and the southern lights, Aurora Australis. This natural phenomenon has given rise to myths in many cultures. The northern lights are still imbued with a sense of romanticism and myths, even though we now know that they are in fact charged particles from the sun interacting with the atmosphere.

Aurora Ekvatorialis is based on the same physical elements. The light phenomenon taking place in the light installation is on a physical level the same as the aurora: electricity through gas. The gas in the light tubes is noble gas extracted from the air in Ghana, close to the equator. The batteries that power the lights are charged with solar energy in Ghana. As such, the invisible gas together with the electricity – argon and sunlight – are the main materials in the work.

As the supply of energy from the batteries is limited, the lights are turned on and off according to a load-shedding schedule so that the solar energy will keep through the exhibition period. The work has restriction as a basic condition, as it is a light installation that is not always “on”. The dumsor guide (dumsor means on and off) in the form of a mural in the installation, indicates when the lights will be on and off, and references load-shedding schedules announcing planned blackouts.

The short story in the booklet “Ananse Makes Aurora” written by Kwame Aidoo, spins a tale about the mythical origin of the Aurora phenomenon, with the spider character Ananse known form Ashanti folk tales as the main protagonist. Northern- and Southern lights have inspired different myths in the areas where they can be seen, but according to this tale, the polar aurora phenomenon originates with Ananse from the equator.

Produced with support from The National Museum of Art, Architecture and Design, and NBK/Vederlagsfondet.