By augmenting the visual scale with the aid of a light microscope, the cinematic artwork Reclaiming Vision by artists Marjolijn Dijkman and Toril Johannessen brings a diverse cast of aquatic microorganisms into the limelight. The video renders visible processes in the water that are hidden to the naked human eye. It takes viewers on a journey through a world of microbes sampled from the brackish waters of the inner Oslo Fjord, Norway. The film also features algae cultivated at the University of Oslo, as well as traces of plastics gathered from the Atlantic. It shows worlds enfolding in drops of water and portrays their inhabitants as participants in a wet and vivid drama instead of being mere objects of artistic and scientific interest.

Besides luring viewers into visually intriguing microbial worlds, the film also questions the accustomed ways of looking at these organisms and portraying them in scientific contexts and nature documentaries. In Suomenlinna, the work is shown as a large-scale version that triggers an even more fundamental shift in perspective: the massively magnified microorganisms introduce a temporary disruption into the usual scale and classification system of living beings. The shift in scale enables looking at these organisms in a different light and highlights that they have a far bigger role in planetary processes than their actual size indicates.

Without these organisms, the earth would be uninhabitable for humans and many other animals. With a shift in perspective, they could be considered to be the truly ‘dominant’ form of terrestrial life, if one wants to think in those terms:

Microorganisms don’t usually appear on lists of the most fascinating critters. Despite their significance to all life, they have been considered too small, too simple, or perhaps too weird to top these charts. Ever since the development of the microscope at the end of the 16th century, it has been possible to observe these tiny beings that permeate all life. Since then, they have been looked at with both curiosity and concern, but their massive influence on all the world’s life-sustaining processes is still only beginning to be unfurled.

This text is written with all kinds of microorganisms in mind, not only those inhabiting the seas. ‘Microbe’ is a general term covering an extremely diverse range of microscopic life, such as Bacteria, Archaea, and single-celled eukaryotic organisms such as Protozoa. Also molds and some forms of fungi and algae come in microscopic varieties. They are tiny but outnumber all other life forms combined. In the oceans alone, they comprise more than 90 percent of the total biomass. More importantly, the microbes in the oceans make it possible for you and me to keep breathing, as they are responsible for 50–85 percent of the world’s oxygen production and carbon dioxide storage. They excel at symbioses, working in collaboration with other organisms, and for this reason, they have had an evolutionary impact on every other life form.(2)

Surprising findings on microbial abilities are constantly emerging. This poses a challenge to viewing microorganisms, as is usually the case, as ‘simple’ or ‘undeveloped’. With their outstanding capacities of producing energy and adapting to changing situations, microbes are envisioned as having increasingly important roles in climate breakdown mitigation, novel forms of energy production, and the development of treatments for various kinds of health conditions.

In other words, we have plenty of reasons to view microbes as something else than just simple (usually, but not always, single-celled) creatures occupying the lower branches of the evolutionary ‘tree of life’.(3) Nevertheless, it takes not only technical assistance but a shift in mindset to be able to attune to things that are happening on a microscopic level. And it actually takes quite a fundamental change of perspective to give microbes the credit they are entitled to.

Reclaiming Vision opens up an opportunity for this kind of change in perspective. Making the film required bringing together many kinds of artistic and scientific expertise, as well as collaboration across disciplines – something that Dijkman and Johannessen are both well known for. With this artwork, the two artists wanted to explore the possibilities of engaging with marine life in an unconventional way. The work was created by questioning the familiar formats and narratives of scientific knowledge production and popular nature documentaries, even though it resonates with the aesthetics and conventions of both.

Working together with scientists and a number of other collaborators, the artists visualized the various processes happening in the samples taken from particular bodies of brackish water. The events in the film are not documentation on what happens in aquatic ecosystems or the collected samples in a laboratory. Instead, all the scenes are carefully constructed, making use of different settings of light microscopy and the particular aesthetic qualities that they allow, from a large amount of footage. They have been edited into ‘a microbial drama’ unfolding in different parts. The initial starting point for Reclaiming Vision was a visual essay, but its narratives are built solely on the careful interweaving of moving image and sound, without textual elements. The soundtrack, composed by Henry Vega, carefully crafted to amplify each turn of micrographic events, accompanies the visual material.

Even though the imagery is constructed and collated with scientific methods and apparatus, some of which are also made visible (measuring scales, microneedles, pipettes…), the artists emphasize that any resemblance to actual scientific research is coincidental. There is a dramatic structure to the film, but space is left for the viewers’ imaginations to come up with storylines. The only moment a human voice is heard is the section with chants of names that resemble Latin categories of the animal kingdoms. This brings to mind how the accustomed ways of naming and classifying are always based on contingent principles. How things are looked at is always mediated by values, norms, and technologies prevalent at a given moment. Currently, debates are ongoing on how different microbial lifeforms should be classified. Some of these arguments challenge deeply engrained notions of biological hierarchy.

Reclaiming Vision emerges from the aquatic ecosystems of Norwegian fjords and estuaries that carry the marks of a massive industrial transition. The film has been made possible by particular scientific facilities, scientists, and the commissioning art institution (Munchmuseet). Despite being born out of a different context in many ways, similar marks left by human activities as presented on the film are visible in the Baltic Sea – one of the world’s largest brackish water bodies. Due to it being almost completely surrounded by land and the many human activities happening on its shores, contaminants and excess nutrient loads have found their way into its ecosystems, causing problems such as eutrophication and oxygen depletion. The high level of harmful substances in its waters makes it one of the most ecologically stressed marine bodies in the world. Many initiatives are taking place to improve its condition, but much work remains to be done to change how people inhabiting the shores of the Baltic Sea engage with it. A point to stress here is that the ways in which water is imagined and looked at impact how it is treated.

Despite the intimate connections that human lives, marine microbes, and other organisms share, how environmental processes and ecosystemic changes are viewed often seems very detached and abstract. In his 1996 book The Spell of the Sensuous philosopher David Abram argues that it is as if ‘modernized’ humanity suffers from a strange inability to clearly perceive other animals. Abram calls for renewed attentiveness to the perceptual dimension and argues that human senses, vision included, have evolved for participation, not for detached cognition.(4) His argument is that a redirection of attention to more-than-humans and an attempt to awaken and practice sensorial empathies could form the basis for an emerging environmental ethics.

Reclaiming Vision can be seen as an experimental approach to evoke sensorial empathies for the microscopic inhabitants of (brackish) water. In recent years, many artistic attempts have been made to increase empathy with the more-than-human world. This sometimes happens through attempts to view the world from another being’s perspective. The problem with this kind of approach is that it is impossible to represent or adopt someone else’s point of view, since the ways in which the world can be encountered are so intimately connected with the uniquely developed sensorial capacities and experiences of each being.(5) Reclaiming Vision seems to operate with a different logic: it builds affinities with aquatic microorganisms by utilizing ‘human-friendly’ means to attune human viewers to their ways. It does this by bringing them optically to the range of human perception and by using editing and music as dramaturgical means in a very deliberate manner.(6) However, the film does not try to humanize its microbial protagonists. It does not deny the fact that these beings are radically different from and will remain mostly unknowable to humans. Valuing these differences and unknowns matters. It is the first step towards more livable futures, where the idea of human exceptionality and mastery has been replaced by more symbiotic worldviews.

(3) The whole notion of the evolutionary ‘tree of life’ can be (and is being) questioned. See for instance Astrida Neimanis, 2017, Bodies of Water. Bloomsbury Publishing, Sydney (120–121).

(5) It is recommended that Abram’s thoughts on language and embedded cognition be read together with more recent, feminist thought on language, embodiment, and ethics. Feminist philosopher Astrida Neimanis, for instance, has been developing posthuman, feminist phenomenology by looking into how biological life is intimately connected and linked to its evolutionary beginnings through water. Alongside finding commonality in being part of a transcorporeal continuum of water bodies, she does emphasize the need to think about more specific politics of location, too. Ibid. 2017 (21). 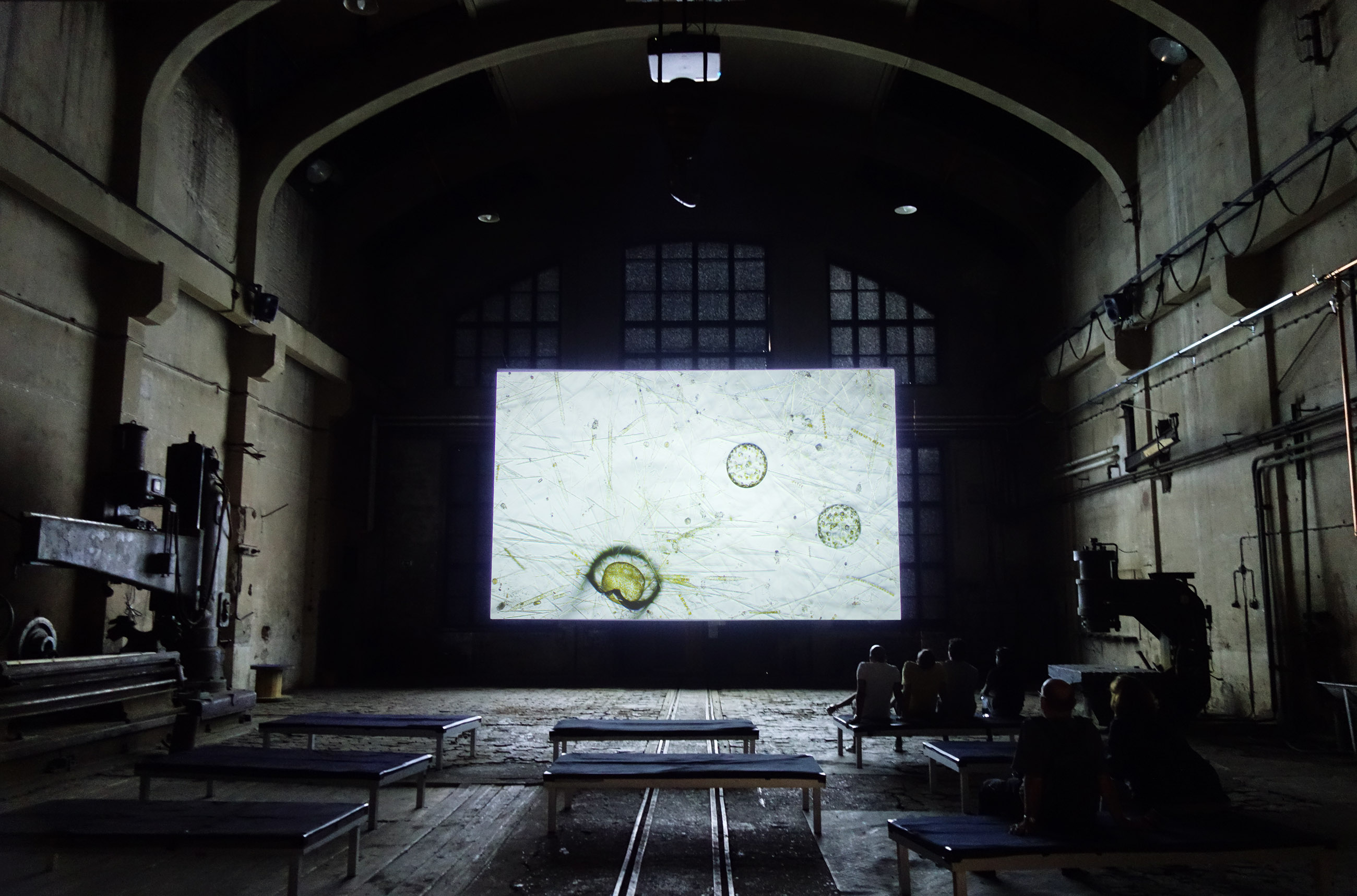 Jenni Nurmenniemi (b. 1983, Finland) is a Helsinki–based independent curator with a long-term focus on ecological thinking and practices in contemporary art. Nurmenniemi is interested in the possibilities and limitations of art in fostering ecologically oriented, symbiotic world views. Most recent curatorial projects include the contemporary art section of the 1st Fiskars Village Art & Design Biennale, Beings with, and the group exhibition Fictional Frictions as part of Gwangju Biennale 2018. In 2012–2018, Nurmenniemi worked at HIAP and curated the multidisciplinary, international collaboration project Frontiers in Retreat (2013–2018). Currently, Nurmenniemi is rehearsing ecologically sensible art practices within the Post-fossil Transition Project, which is being run by HIAP and the Mustarinda Association. Nurmenniemi graduated with Master’s degrees in Curating (CuMMA / Aalto University, Helsinki, 2013) and Sociology (University of Tampere, 2010) with an emphasis on Gender Studies, Media Culture/Journalism, and Art History.­­

This text was written on the occasion of the exhibition Reclaiming Vision at Suomenlinna, Helsinki, curated by Nurmenniemi within the framework of the Post-fossil Transition Project.

The film Reclaiming Vision, made in collaboration with Marjolijn Dijkman, was originally commissioned by The Munch Museum for Munchmuseet on the Move.