Let’s imagine that this text is written for an exhibition set at the twisted conjunction of an estuary, where a river meets the sea, or at a mangrove swamp, or, for that matter, at a flooded underground Miami car park temporarily inhabited by an octopus. Temporal insofar as a waterpump and a human techno-fix later the space was dried out, and the cephalopod inhabitant, with its proven adaptive qualities, would have found refuge elsewhere. The question remains whether this climatic event, caused by a sudden influx of a mixture between salt water from the sea and fresh water from the nearby swamp, was only incidental in nature. How a certain negligence could have allowed for this makeshift pool to take shape in these cultivated environs, previously solely inhabited by humans and domestic pets. And, beyond most of our figuring capacities, to what extent one might be able to determine the degree of relative sea level change from tasting the thin film of salty soil left to cover the surface of the car park floor after being drained.

These aforementioned words only do partial justice to the complex backdrop against which artists Marjolijn Dijkman and Toril Johannessen have recently formulated their collaborative practice. Sharing an interest in the domain of human perception and experience in close relation to the natural sciences, scientific methods and methodologies, the two have embarked on a series of project-based works revolving around the subject of brackish water in connection to our current climate regime. Brackish water is subject to a higher degree of salinity compared to fresh water, but less so than seawater. It often comes into being when these water streams meet, in swamps, lakes, lagoons, marches and deltas, estuaries, but equally the Black and Baltic sea are brackish.

As an introduction to the subject of brackish water one could ascribe Liquid Properties (2018) as a seminal work in their joint endeavour. As a sculptural installation consisting of a diagrammatic patchwork of interlinking rods, the work presents a variety of glass bulbs containing water samples from different sources. Through magnifying lenses enclosed in the glass buoys, one could observe the development of natural processes in these samples, among the growth of algae, vegetation and other aquatic specimen like worms of shrimps, or detect a decline in biodiversity as the life force simply could not be contained any longer. Here it is interesting to think about the systemic nature of the installation, as if the glass bulbs would constitute the domains of a planetary system; seemingly self-contained but at the same time subject to an overarching metabolism that would not allow life to be contained outside of these glass ecospheres.

In that sense one could arguably read brackish water as analogues to how anthropologist Elizabeth Povinelli writes about “geontopower,” defined as the intensifying contrasting components of nonlife (geos) and being (bios, ontology) within late liberalism. Among other positions, Povinelli exemplifies “geontopower” through the figure of the desert, as holding on the distinction between life and nonlife and dramatizing the possibility that life is always at threat from the creeping, desiccating sands of nonlife. Arguably one could read the figure of the desert as a more contemporaneous invocation of the canary in the coal mine.(1) In other words still, as the desert’s uprising through intensifying periods of drought is encroaching on life, the surge of brackish water could be seen as symptomatic of the current climate regime, with the accelerated mutation and degradation of aquatic environmental biodiversity caused by ocean acidification and sea level rise.

In that, Dijkman and Johannessen could be seen as de facto investigators and hairsplitters of the composition of brackish water, with special attention to the plethora of microorganisms that inhabit these increasing brackish biotopes that tend to bypass the human sensorium altogether. Central to their collaborative practice is the film work Reclaiming Vision (2018). Captured through a light microscope, the work presents a diverse range of microorganisms sampled from the brackish waters of the inner Oslo Fjord alongside cultivated algae. In that, the film extrapolates the different co-inhabitants of brackish water that are obscured from the range of human vision. Here, Dijkman and Johannessen, perhaps unnoticeably, shift the focus of the work moving from a loss of the documentary to its recovery in the key of fiction. Albeit resonating with the aesthetic of nature documentaries and the expectancy of scientific objectivity, the film is rather the outcome of different sources of fieldwork compiled into a new fictitious patchwork of significations—one that is nonetheless mighty real and not less alarming in nature. This new patchwork of significations largely extends itself beyond the givenness of the source material presented in the film, as their work forms a subtle commentary on the traces left by human activity—which surely could be deduced by a trained eye capable of judging the composition of the brackish water samples—but is rather found in the disconnect between humans and the perception of their surrounding environment.

A central axis within their thinking concerns the idea that for most humans the perceptual feedback loop does not come full circle. Here, climate deniers are less of a problem in their unwillingness to accord to the current climate regime than the majority of climate quietists. The latter category having seen climate effects being historicized before their eyes,  most often on the premise of scientific findings, but standing incapable in mobilizing their sense-awareness into the field of interagentivity.(2) Even with the interposition of a scientific instrumentarium enabling us to see and rendering us perceptible to matters of concern—like the microscope—it still informs a tendency to contemplate observable phenomena from a detached position. The latter also being exemplified in the photographic series Aberrations (2018), zooming in on localized and global marine pollution, among microplastics, oil spills, or sediments of pigments from industrial waste. These images show aquatic life forms invisible to the human eye, yet highly affected by human activity.

Both aforementioned work titles refer to the human scopic regime and the need for making reconnections on the level of a more conscious registration of matters of environmental concern. No longer through the registration of business as usual by resting all too comfortably in our category of human being, whilst reasoning in terms of stable patterns and the constructed artificiality of our surroundings, but by activating and applying our shape-changing capacities. Let’s reclaim our ancestral eyes from the sea and delve under the water surface, no longer serving as the self-assigned threshold and limit of our perception, but as a breakthrough to join the climatic equation and start discussing inter-species interdependence.

(2) Anthropologist Tim Ingold has coined the term “interagentivity,” which he uses to highlight the constitutive quality of the “dwelt-in world” of hunter-gatherers. Here, human beings engage intimately with one another as well as with non-human components in the environment. Ingold prefers to speak of “interagentivity” rather than of “intersubjectivity,” as we should not infer that every agent, with practical conscience, is subjectively determined, thoughtful and intellectual, with discursive, narrative awareness, as we commonly believe adult humans to be. 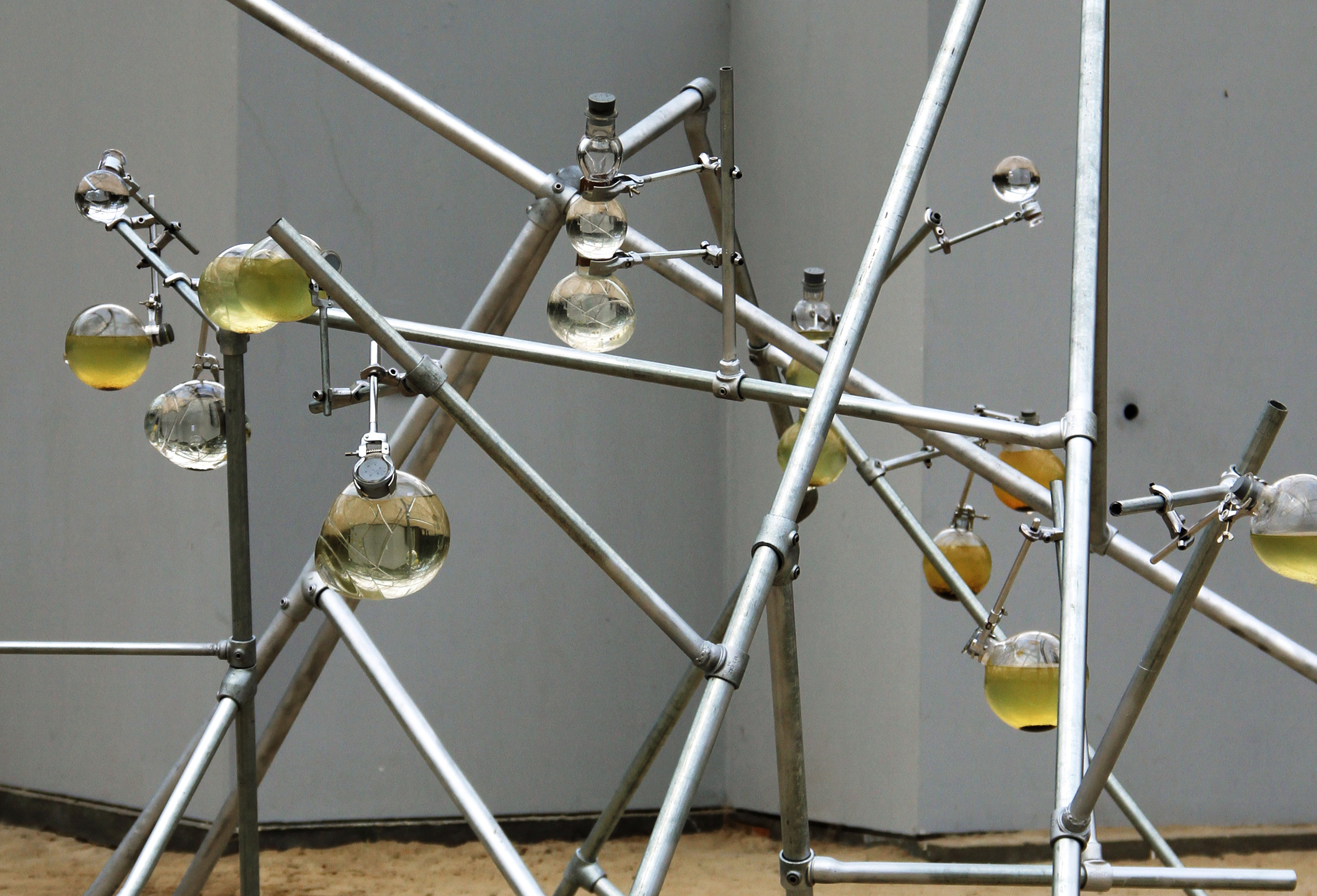 Niekolaas Johannes Lekkerkerk (1988, NL) works as a curator and writer for The Office for Curating in Rotterdam. Central to Lekkerkerk’s work are social and political discourses revolving around daily living and working practices, cultural norms, and ideologies. He particularly focuses on debates concerning the Anthropocene, ecology and climate, post-humanism, and the increasing entanglement between nature and culture. Lekkerkerk recently published The Standard Book of Noun-Verb Exhibition Grammar (Onomatopee, 2018), a publication regarding the exhibition as an ecological assemblage. In 2012 he received the inaugural Demergon Curatorial Award, and in 2014 he was the beneficiary of the Akbank Sanat International Curator Competition.

This text was commissioned by OSL Contemporary on the occasion of the exhibition Liquid Properties by Marjolijn Dijkman & Toril Johannessen, Summer 2019. The exhibition presented three different bodies of work from their collaborative practice; Liquid Properties, Reclaiming Vision and Aberrations.

Liquid Properties and Reclaiming Vision were originally commissioned by The Munch Museum for ‘Munchmuseet on the Move’, Oslo, NO, 2018.