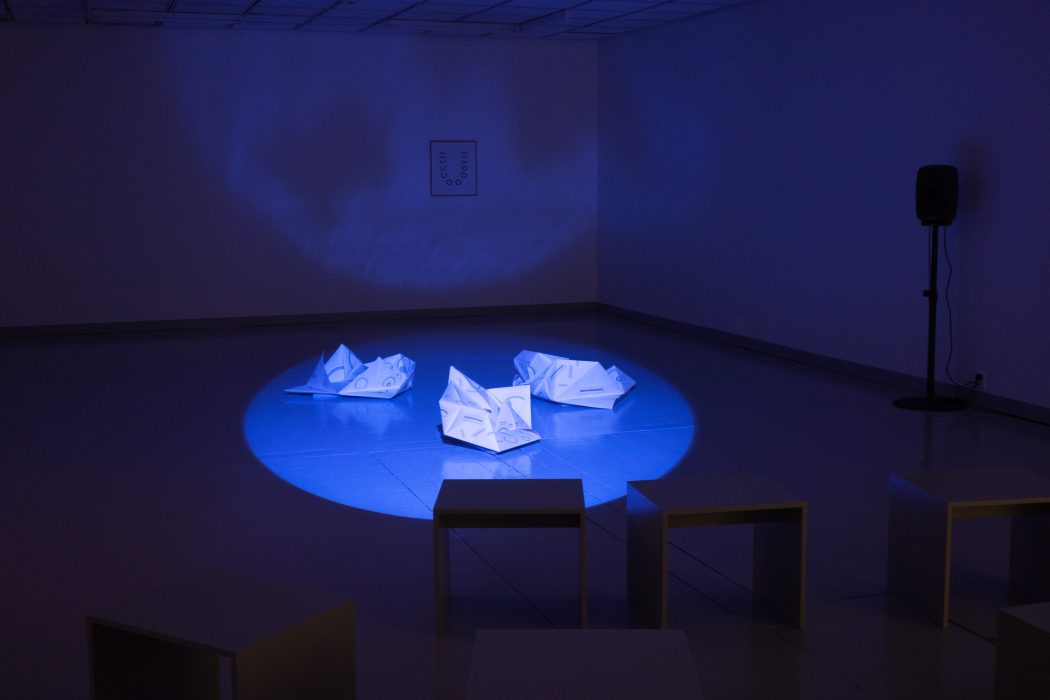 The Invention and Conclusion of the Eye is an audio play about vision. The play narrates the story of how the eye emerged and evolved in nature, and how it may become expendable as a sense organ in the future. The work explores the assertion that we are in a visual paradigm, asking what a post-visual world would be like and how would we perceive it.

The audio play is led by the character Mx, who works on an article for a reference book about the evolution of the eye and its future development. In audio notes for ***, a predictive analytics software designed by Mx, three statements are presented: 1) We see alone, but everything we see is the same. 2) The world we live in is about to become optically invisible. 3) The eye will retreat with time.

Building on theoretical models estimating how the eye evolved from a light-sensitive spot into a complex eye, Mx investigates if the eye will de-evolve with the current constant exposure to high technology that arguably shapes the way we see and perceive. Her desire is to get direct access to the invisible by bypassing the optics of the eye that create images of the visual world on our retina, and instead perceive extrinsic properties through abstraction and cognition. Eventually, Mx comes to the conclusion that the visual cortex will increasingly be used to create mental images based on calculations and abstractions, which will gradually make the eye irrelevant.

Mx discusses her findings with (Z), an image editor working on an assignment for her. She feeds her information to *** and seeks confirmation via C://, which apparently withholds information about the eye but turns out to echo Mx’s own ideas to an extent she has not foreseen. To Mx, visualisation is the key, not as graphical visualisations, but in the other meaning of the word: To form mental images from something that is not present for the gaze.

The audio play is staged as a theatre play, produced for multi channel playback with synchronised stage lighting, together with diagrams and paper fortune tellers referred to in the story.

Publication:
The Invention and Conclusion of the Eye is published as part of Supplement, an occasional pamphlet series by Filip. The publication includes a series of diagrams and the manuscript in English, Norwegian and French.

Produced with support from Hordaland Art Centre, Plug In ICA and OSL Contemporary.